Head shape deformity became more frequent after the Back to Sleep Program focused on preventing SIDS[Sudden Infant Death Syndrome. It occurs often if babies lie on their bellies]. Nowadays, more than 3% of newborn babies** have severe or very severe head shape deformity. Up to 50% have mild or medium deformity.

FOR CHILDREN AGED BETWEEN 4 AND 14 MONTHS

Cranial remoulding orthosis is lightweight and custom-made. The inner part of the orthosis is round-shaped, allowing the child to sleep and move without any pressure being exerted on the flattened area of the head. The orthosis does not interfere with any children‘s activities and most parents say that their children have adapted quickly.

Research*** shows that orthotic treatment using a helmet is the most effective solution of severe head shape deformity. The cranial orthosis offers a simple solution for children with an abnormal head shape. The head becomes more symmetrical and normally shaped when its growth is given the right direction by the effect of the orthosis.

The duration of treatment varies. It depends on how old the child was when the treatment began and how quickly he/she is growing. Children younger than 12 months complete the treatment within 4–6 months. Older children usually need longer treatment since their skull is growing more slowly, it is stronger and more resistant to change.
Cranial remoulding orthosis is not indicated in children younger than 4 months. Children younger than 3 months respond well to positioning. After three months, the baby starts turning and changing positions, positioning therefore loses its meaning. In this period, physician reassesses the shape of the baby’s head to determine whether the baby needs treatment with the use of a cranial remoulding orthosis. After the 12th month, the brain and skull are no longer growing as fast as in the first year of life. Treatment with the use of an orthosis may be commenced at 14 months at the latest and finished at 18 months.

A 23-HOUR WEARING SCHEDULE IS CRUCIAL TO ACHIEVING SUCCESSFUL RESULTS

From the fifth day, the orthosis should be worn throughout the day with two half-hour brakes, the first in the morning and the second in the evening. 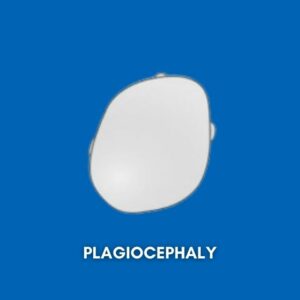 Plagiocephaly: is a simple skull deformity. This shape is often associated with Torticollis or other cervical spine impairments which prevent full range of motion in the cervical spine. This results in the baby keeping his/her head in one position for a long time, causing flattening. Deformational Plagiocephaly usually poses a serious problem which should be treated in children with a moderate to very severe degree of head flattening.

The head has the following characteristics 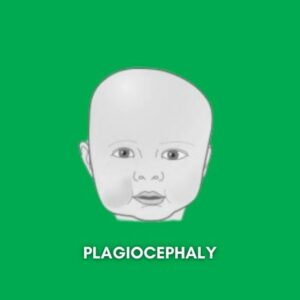 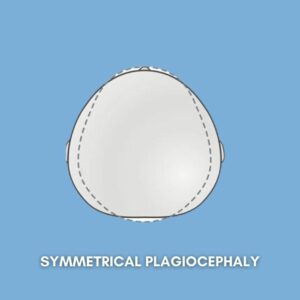 Symmetrical Brachycephaly: Often referred this condition as baby flat head or flat head syndrome, is a deformity relating to the proportionality of the child’s head. This shape usually occurs in children lying supine most of the time and not turning their head to the sides. It’s a serious problem which should be treated in children with moderate to very severe head flattening.

The head has the following characteristics
• Flattening is at the centre back of the head.
• The head is unusually wide with parietal prominence on both sides.
• Seen in profile, the head is higher and flattened more than normal heads.
• The forehead is prominent and may be shifted forward on both sides. 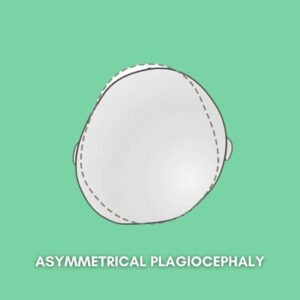 Asymmetrical Brachycephaly:the unusual head shape is caused by a combination of Plagiocephaly and Brachycephaly. This shape is often associated with Torticollis, not allowing free movement in the cervical spine. This deformity is a serious problem which should be treated using an orthosis in case it is a moderate to very severe degree deformity. 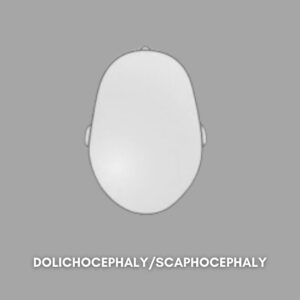 Dolichocephaly: The head is long and narrow. This shape most often occurs as a result of the baby spending most of the time on his/her side. Lying on the side is common in premature babies at a neonatal intensive-care unit. This deformity is a serious problem which should be treated using a remoulding orthosis in case it is a moderate to severe degree deformity.

The head shows the following characteristics
• The head is unusually long and narrow with no visible edge along the sagittal suture.
• Asymmetry may occur at the right and left diagonal dimension.

Torticollis and effect of positioning: Flattening might worsen after the birth, especially if the

neck muscles are in tension, weakened or asymmetrical. This condition is known as Torticollis and contributes to problems with the head shape by preventing the head from turning to one side. Torticollis must be treated together with the use of a cranial remoulding orthosis. Torticollis treatment usually takes place 2–3 times per week.

A home exercise program is also important. It helps maintain proper length of the neck muscles and supports function of these muscles in common activities such as turning, sitting, crawling and playing. In addition to Torticollis, another cause of postnatal deformational Plagiocephaly may be long-lasting lying on the back against a hard surface – e.g. child seats, car seats, swings, pram. Before 1992, children used to be put to bed on their bellies which kept the weight from the rear of their head. A very successful campaign „Sleeping on the back“ has significantly reduced the incidence of the Sudden Infant Death Syndrome (SIDS), but on the other hand, using child seats and putting children to bed to sleep on their back throughout the night has helped develop head deformities.

Craniosynostosis is a contraindication for the cranial remoulding orthosis therapy.

LIGHT
We leverage the full potential of 3D printing to make Talee lighter.

THIN
Talee is thin to improve babies’ comfort. Your baby will soon forget that it is wearing a helmet! 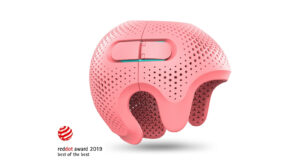 INSTRUCTIONS FOR WEARING AND CARE

1. Your child should wear the cranial remoulding orthosis 23 hours a day,however, he/she may  need a few days to adapt. Follow the schedule by increasing the period of use gradually. Do not hurry up the schedule even if your child experiences no inconvenience. The wearing schedule has been developed to prevent skin problems and will help your child adjust to the orthosis. This schedule provides a safe way to adapt to the orthosis. The fifth day is considered the one when the child is wearing the orthosis for full 23 hours.
2. Do not use the orthosis when your child is feverish (temperature over 38°C). If he/she is running a temperature (up to 38°C), he/she can wear the orthosis, but you should check his/her temperature regularly. If it raises, stop wearing the orthosis. Resume the normal schedule as soon as possible.
3. Take the orthosis off during physiotherapy and put it back on as soon as possible after it’s finished.
4. Take the orthosis off and clean it every day while bathing. Use only a nonperfumed, alcohol-based agent to clean the inner surface of the orthosis since other agents might be harmful to your child’s skin. Wipe the inner surface of the orthosis properly with a clean cloth using an alcohol-based agent or use an alcohol-based cleaning agent together with a new soft brush. Wipe the orthosis dry. You can use a low-temperature hairdryer to dry the orthosis out – this also helps reduce the odour which sometimes arises in the orthosis.
5. Wash your child’s head every day using shampoo. Put the orthosis on when both the head and orthosis are dry. Children with very sensitive head skin may use slightly hypoallergenic or natural shampoo. The orthosis should not get wet and should be taken off while bathing. Put the orthosis back on after bathing once both the head and orthosis are dry.
6. Your child may sweat excessively the first few days until his/her body adapts to the orthosis. It’s a commonplace during this period, the orthosis may be taken off for a few minutes and both the head and orthosis maybe dried out with a towel or low temperature hairdryer. The orthosis
should be put back on after having been dried out. Do not use any baby powder, creams or towels on your child’s head beneath the orthosis. These products may contain perfumes or substances which may lead to skin irritation. Dress your child in appropriate clothes to prevent excessive
sweating.
7. If your child needs a haircut during the treatment, do not shave his/ her head entirely. The contact of the head with the orthosis may lead to irritation when the hair begins to grow. Try to keep the same hair length throughout the treatment to prevent any problems with the shape which
may result from greater or smaller volume of hair.
8. Always check the head skin after taking the orthosis off. Should you discover a red area that wouldn’t disappear within one hour after taking the orthosis off, contact your orthotist immediately. This may indicate that the orthosis needs to be modified. If there is any skin damage, take the orthosis off and contact your orthotist. The orthosis should not be used
until the head heals over.
9. After more than 48 hours without the orthosis, there may be some difficulty putting the orthosis on due to skull growth. Cut down on periods without the orthosis and contact your orthotist if you cannot put the orthosis on.
10. When putting the orthosis on, always check the straps and apertures and make sure to fasten them safely. Loose parts may be dangerous when inhaled or swallowed.
11. When the orthosis is off, make sure to keep it away from pets.
12. Explain the purpose of the orthosis to other caregivers and teach them to use, wear and take off the orthosis appropriately. Practice is important for the family, friends, caregivers and anyone else who takes care of your child.
13. If you have any questions or concerns about the care for your child, contact your orthotist. Any issues should be addressed quickly.

For further queries and appointments with one of the MOBILIS orthotic specialist, call 00971 4 3412550 or email:info@www.mobilis.ae

*SIDS – Sudden Infant Death Syndrome. It occurs often if babies lie on their bellies.
**Deformational plagiocephaly: a follow-up of head shape, parental concern and neurodevelopment at ages 3 and 4 years; B L Hutchison, A W Stewart and E A Mitchell; Archives of Disease in Childhood September 2010.
***Effectiveness of Conservative Therapy and Helmet Therapy for Positional Cranial Deformation. Steinberg etal; Plastic and Reconstructive Surgery; March 2015